Loading...
Home Interviews Machine building in Bulgaria. TANGRA is expanding on new markets.” Interview for Capital newspaper with Dipl. Eng. July Armianov, owner of TANGRA and member of the board of Bulgarian Chamber of Machine Building 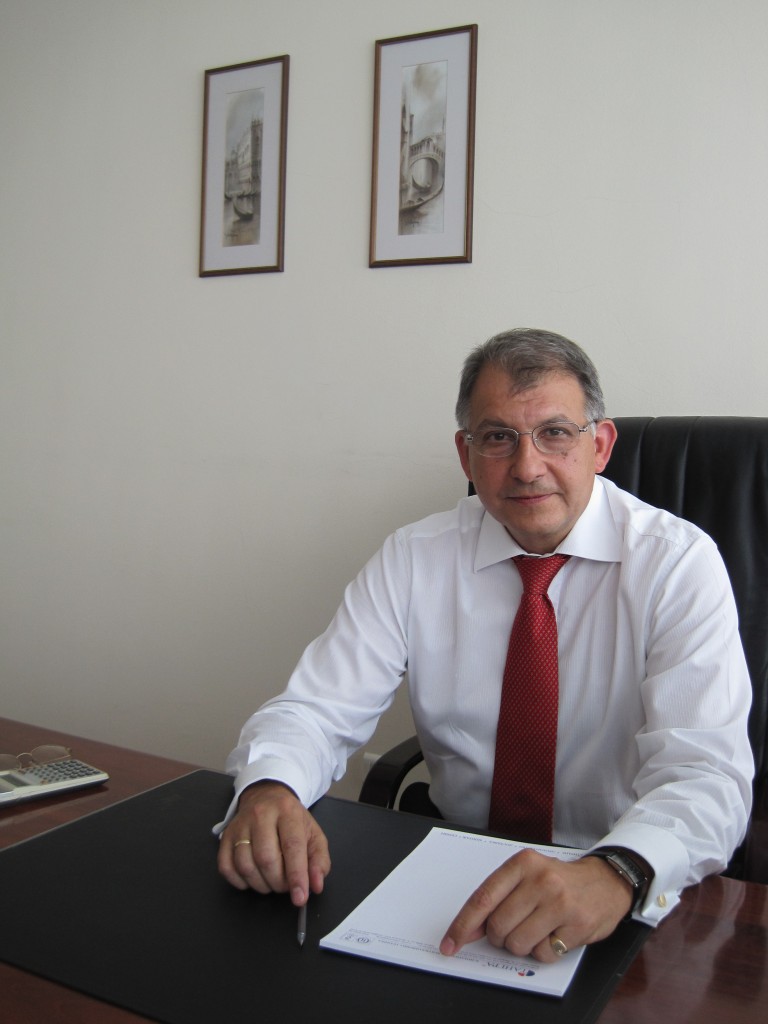 Paris, 1998. International Exhibition on Heating, Ventilation and Air-Conditioning. “An exhibitor at the stall of a Belgian company noticed my interest and asked: “Sir, do you know what this is?”. I replied: “Yes, I do. We have been producing heat exchangers like these in Bulgaria for 10 years”. A little anxious, the exhibitor asked: “Excuse me, sir, where is Bulgaria?”.

Dipl. Eng. July Armianov, owner and general manager of TANGRA – AV, tells this story with a good sense of humour, but also with a little bit of sadness. Because even now his company manufactures ventilation, air-conditioning and heating equipment and faces the scepticism of some foreign clients towards the “Made in Bulgaria” labels.

A new company in an industry without any traditions

Before the changes in its political system, Bulgaria had traditionally developed mechanical engineering sub-sectors, such as manufacturing of forklift trucks, lathes and metal processing machinery etc. The ventilation and air conditioning equipment was not among the most popular. There were few production companies – for ventilation elements and ventilators, and the expertise – as far as it existed – was limited to the boundaries of the “COMECON” /Council for Mutual Economic Assistance/, explains Dipl. Eng. July Armianov.

The newly established company TANGRA – AV started working in this sector, back in 1989. It lacked significant capital or manufacturing experience, but compensated with ideas and courage.

“Our company was incorporated by virtue of the then effective Decree 56. I borrowed some money from my father – Lazar Armianov, who used to have private company called TANGRA, before 1944. Our company was established by two families of co-workers and a cousin – all designers and engineers”, says Mr. Armianov.
In the beginning, the new company only dealt with designing ventilation and heating installations and energy efficiency analyses. The only sales were selling our intellectual labour.

It is time for production

In 1991 the shareholders hired a small workshop, transformed it and invested their income from design fees in machinery, tools and materials. Then they recruited the first workers and fitters. It was the year of the first product, manufactured by the company – a raster ventilation grille.
With time, the range of products and elements for embedding into ventilation and air conditioning became more extensive.

Two years later, “TANGRA – AV” opened the first Bulgarian shopping centre and show room for ventilation, air conditioning and heating equipment. “The company used it to show that this type of equipment can be offered and sold, almost as in a supermarket,” comments Ivan Armianov, „Sales Department“ Manager.
The company established its own distribution network in Bulgaria and became the official representative in Bulgaria of the Spanish company “Soler & Palau” – one of the largest manufacturers of domestic and industrial fans.

Working for the Nuclear Power Plant

The period 1993 – 1995 was of particular significance for the company. At that time the “Kozloduy” Nuclear Power Plant underwent recertification – a process, involving extensive repair activities. TANGRA – AV took part in the refurbishment and upgrading of the ventilation air handling units and filtration systems of the nuclear power plant.
The structural design was prepared by company’s General Manager – Dipl. Eng. July Armianov, and the filtering elements and the reconstruction were performed by company’s staff. The installations were subsequently approved by the European nuclear power certification authorities.

In 1995 TANGRA – AV moved its production facilities, ensuring a three times larger area, increased the number of its staff and equipment. During the same year, the company made its first sales abroad – recuperative heat exchangers, developed and produced by the Company were sold in Greece.
This period was followed by the critical years 1996-1997, characterized by enormous inflation and deep economic crisis, but the company managed to stay afloat due to its ongoing investment in goods, materials and machinery.

On its own terrain

In 1999 the Company purchased a plot at the Europe Boulevard in Sofia and built its first company-owned production and sales centre. At the end of 2003 the team reached a little over 100 people, and the product range included more than 30 standard products with numerous modifications and dimensions. In 2001 and 2003 the company opened two shopping centres – in Varna and Burgas.

In the subsequent years of the development boom, when numerous hotels and resorts emerged constantly, TANGRA implemented a large number of installations and within four years (between 2004 and 2008) it reported an annual growth of its turnovers of 20-25%. The company was responsible for the installations of dozens of large hotels in the Black Sea Resorts and in Bansko, as well as in the business centres in Sofia and other parts of Bulgaria.

The number of employees reached 200, and the export exceeded 10% of the total production. It was the time, when TANGRA completed and commissioned its second production facility, with new, high-performance equipment. At that time, the company established its metal processing subsidiary – BG Steel.

In the spring of 2009 the development business bubble burst became obvious. A lot of already started projects were “suspended”, and no new projects commenced. TANGRA also experienced certain difficulties, decreasing its staff by 10% and focusing on the optimization of the production. The sales dropped. The company tried to fight this trend by participating in international fairs and exhibitions and by continuing with its innovations.
The Company started manufacturing pellet boilers. It expanded its production facility and found new partners in Europe and in 2011 it became a member of the European Association of the Heating, Ventilation and Air-Conditioning Companies – REHVA.

The turnovers of the company started to return to the levels before the crisis, and in 2013 it became the first (and so far – the only) Bulgarian company, certified by the German TUV Rheinland for the production of air handling units and pellet boilers. This means that these products meet all the European standards, related to the rigidness of structure, air flow, efficiency, electricity consumption, safety, cleaning capability etc. It is important to note that the hygienic air handling units of TANGRA are suitable for operating theatres, rooms for insulated patients, hospitals, chemical and pharmaceutical production facilities, and food and beverage industry. They are also certified by TUV Rheinland. At present, TANGRA is the sole owner of such a certificate in Bulgaria.

The Company is also proud of the award, received from the German-Bulgarian Chamber of Industry and Commerce for the line of high efficiency energy saving ventilation systems.

Today, the company produces more than 20 types of products, with dozens of models and variations each. It has a dedicated R&D department, two production facilities with total floor are of 8000 sq. m., own HVAC laboratory for product testing, a shopping and consulting centre in Sofia, Varna and Burgas. TANGRA has more than 160 employees and has distribution partners in more than 15 countries.

The organization continues to rely on its own innovative and unique developments for heat recovery ventilation and air conditioning equipment, allowing the recovery of up to 92% of the energy from the discharged exhaust air. The production lines in the factory were built with the help of OP Competitiveness

The company has its own dedicated workshops for the production of: ventilation grilles, ventilation elements and equipment, air handling units and heat recovery units, pellet boilers, operating on biomass, laser and plasma cutting and sheet metal processing and powder coated painting.

We have precise and high-performance equipment, which enables us to provide excellent quality and reasonable prices, summarizes Dipl. Eng. July Armianov.

In 2015 TANGRA reported a 5% increase in its turnover and considers that a success, after the series of difficult years.
“There are two ways to boost your sales – to offer new products to existing customers or to find new customers. We use both”, says Mr. July Armianov.

TANGRA’s products are highly demanded on markets with different specificities. Ivan Armianov gives examples of TANGRA’s market strategy: “We sell in all Balkan countries. These are pricing orientated markets, where we manage to sell successfully. Our market in Switzerland is completely different – the demand there is mainly for quality and efficiency and the prices comes after that. We sell there as well. We also sell in Poland, which is one of the main landing ports of Chinese products in our sector”.

“The market stagnation is significant. Unfortunately the main competition is on the field of the prices, and this is officially encouraged, since the main selection criteria in many public procurement procedures is the “lowest price”, comments Dipl. Eng. July Armianov.
He believes that among TANGRA’s advantages is the complex approach offered – from design, construction and production to the installation and servicing of the installations. A significant advantage is the free corporate software applications, facilitating the designers in the selection of the most suitable installation.
And here are some more reasons for optimism: “When we started in 1989 the “heat recovery ventilation” was exotic. Now it is mandatory, according to all the European standards”, summarize Mr. Armianov.
This year, the TANGRA is negotiating with new Italian partners and works for its expansion on other markets as well. The team of the company will also take part in two international exhibitions and fairs in Germany and England.
“All our products will have the label Made in Bulgaria. We will continue to prove that “Made in Bulgaria” means quality”, promise TANGRA – AV’s managers as they plan a 5% growth in sales in 2016.

Pictures from the Capital newspaper, February 2016